Page View:
Site View (Blog Template):
JUST A SIMPLE INTRODUCTION
WHAT’S THIS mAh?
SOME VERY FIRST, AND OBVIOUS, TIPS
DID YOU SAY DAMAGE TO YOUR BATTERY?
MORE ON DAMAGE AND CYCLE LIFE
LIARS, LIARS AND BATTERY SUPPLIERS
I WANT AN HONEST DAY OF BATTERY USAGE
YOUR BATTERY; YOUR ANXIETY
WHY ARPA-E HAS GOT IT WRONG?
THE BATTERY CONUNDRUM OF MOBILE DEVICE MAKERS
DID YOU KNOW…?
A PEEK INSIDE A LITHIUM ION BATTERY
WHAT IS A BMS?
WHY IS CHARGING WITH CCCV BAD?
WHAT’S THIS STEP CHARGING?
THERE IS NO SUCH THING AS A FREE LUNCH!
MEDIA AND BATTERIES: MANIA OR EDUCATION?
YOUR GUIDE TO SELECTING A MOBILE BATTERY
I WANT MORE BATTERY CAPACITY IN MY SMARTPHONE
WHAT’S THIS FUSS ABOUT CHARGING?
DECIPHERING CLAIMS OF CHARGE TIMES
WHICH SMARTPHONE CHARGES THE FASTEST?
KIDS, DON’T DO THIS AT HOME!
THE BATTERY INDUSTRY IS HITTING THE WALL!
WHAT HAPPENS AFTER 80%?
HOW TEMPERATURE WREAKS HAVOC ON YOUR BATTERY
STANDARD GAMES BATTERY VENDORS PLAY
HOW DOES A FUEL GAUGE WORK?
THE DIFFERENT SHAPES OF A BATTERY…
COST, COST AND COST
A PEEK INSIDE THE BATTERY OF A TESLA MODEL S
ELECTRICAL CHARACTERISTICS DURING CHARGING
THE SCIENCE BEHIND WHY THE BATTERY VENDORS ARE HITTING THE WALL
WHY IS FAST CHARGING SEEMINGLY DIFFICULT? OR IS IT?
I WANT TO CHARGE WITH A SOLAR CELL – OR NOT!
DON’T ALWAYS TRUST YOUR ENGINEERS
CHEATING THE REPORTED CHARGE TIME
WHAT IS QUICK CHARGE 2.0 FROM QUALCOMM?
THE BATTERY SCANDAL OF THE BOEING 787
WHAT ARE THE REAL 0% AND 100% POINTS?
LCO, LFP, NMC… CRYPTIC LIVES OF THE CATHODE
WHY STEP CHARGING IS MISLEADING
ARE LITHIUM ION BATTERIES BECOMING UNSAFE?
YOUR BATTERY IS FINE, YOUR APPS ARE NOT!
LITHIUM IS GOLD
…AND THE SURVEY SAYS:
THINNER IS NOT BETTER
THE LITTLE COMPANIES THAT COULD
THE BATTERY COMPROMISES OF MOBILE DEVICE MAKERS
MOBILE USERS: REBEL AT THE BATTERY COMPROMISES
THE RISE AND FALL OF A123 SYSTEMS
YOUR MOBILE FAST CHARGING OFFICE AT YOUR FINGERTIPS
HOW YOUR BATTERY DETERMINES YOUR PHONE’S FASHION
MOBILE WORLD CONGRESS… WHAT IS THAT?
AT MWC 2015, BATTERIES & DESIGN ARE KINGS
SOLID-STATE THIN-FILM BATTERIES… WHAT ARE THEY?
UNDERSTANDING POWER USAGE IN A SMARTPHONE
SAMSUNG, BE HONEST IN YOUR MARKETING CLAIMS
THE ANATOMY OF AN IPHONE 6
WHAT IS CELL BALANCING?
LIAR, LIAR, PANTS ON ULTRAFIRE
YOUR WATCH BATTERY IS REALLY CHALLENGED
WHY I WILL NOT BUY THE TESLA POWERWALL SOON
ON MOORE’S LAW AND SNAIL’S LAW
ON THE EFFICIENCY OF BATTERY-POWERED VEHICLES
MARY MEEKER AND THE BATTERY
THE INNER SANCTUM OF A BATTERY & FAST CHARGING
AND THE MAGIC NUMBER IS 3K
INSIDE THE BATTERY OF A NISSAN LEAF
REVIVING A DEAD BATTERY, REALLY?
IS THERE ENOUGH LITHIUM?
LET’S TALK ABOUT THE WAIST
LITHIUM PLATING IS IMMENSELY HAZARDOUS
QNOVO QNS and QUALCOMM’S QUICK CHARGE 3.0
LET’S TALK ABOUT ENERGY DENSITY
WOULD 007 DRIVE AN ELECTRIC CAR?
THE FINANCIAL DILEMMA OF BATTERY MANUFACTURERS
THREE DISCOVERIES THAT REVOLUTIONIZED Li+ BATTERIES
CAN I FAST-CHARGE MY TESLA OR EV?
HOVERBOARDS ARE CHALLENGING BATTERY SAFETY
THE RACE FOR AUTONOMOUS ELECTRIC VEHICLES
THE COST COMPONENTS OF A LITHIUM ION BATTERY
THE MEANING OF ADAPTIVE
ADAPTIVITY APPLIED TO LITHIUM ION BATTERIES
WHY CONSUMERS BITCH ABOUT BATTERIES
SONY XPERIA INCORPORATES QNOVO TECHNOLOGY
ELECTRIC VEHICLES STILL NEED EXPENSIVE GAS TO THRIVE
CHARGING THE SAMSUNG GALAXY S7 EDGE
FIVE COMMON MISCONCEPTIONS ABOUT Li+ BATTERIES
CHARGING THE GALAXY S7
CARMAKERS WILL NOT FEAR EVs FOR SEVERAL MORE YEARS
IT’s ABOUT TIME WE DISCUSS SAFETY
WHERE CAN I BUY SOME LITHIUM ?
WHAT IS THE INTEREST IN ENERGY STORAGE?
THE CHANGING NATURE OF THE FUTURE ELECTRIC GRID
BATTERY AGNOSTIC = BATTERY ILLITERATE
YOUR MOBILE DEVICE NEEDS TO SLEEP TOO
WHAT POKEMON & TWITTER HAVE IN COMMON
CONFUSING POWER
THE STATE OF THE LITHIUM ION BATTERY
MAKING SENSE OF 100 KWH
IT’S EASY, BUT NOT RIGHT, TO PICK ON SAMSUNG
THE REAL SCIENCE BEHIND BATTERY SAFETY
THE PERILS OF 4.4 VOLTS
AN INTUITIVE LOOK AT ELECTROCHEMICAL IMPEDANCE SPECTROSCOPY (EIS)
BATTERY SAFETY WITH FAST CHARGING
MANUFACTURING DEFECTS YOU DON’T SEE
CHINA CALLING
TRANSLATING WHAT SAMSUNG SAID ABOUT THE NOTE 7
FOOL’S OVERTURE
THE YEAR THAT ELECTRIC CARS WILL ECLIPSE SMARTPHONES
HOW YOU CHOOSE YOUR SMARTPHONE DRIVES THE BATTERY
WHAT THE LABEL ON A LITHIUM-ION BATTERY MEANS
DEMYSTIFYING CHARGE TIMES
VOLTS THAT WILL ZAP YOUR BATTERY’S LIFE
QNOVO ADAPTIVE CHARGING IN THE LG V30 SMARTPHONE
NEW SMARTPHONES PUSH THE BATTERY LIMITS
THERE WILL BE NO TRUE ELECTRIC VEHICLE MARKET WITHOUT FAST CHARGING
EXPLAINING WHY APPLE MUST SHAMEFULLY THROTTLE OLD iPHONEs
5G = GLOBAL, GREAT, GALVANIZING, GRAVE, GRUELING
SHOULD I CHARGE MY BATTERY TO 100% ?
WE ARE NOT TAKING BATTERY SAFETY SERIOUSLY
WHY IS PHONE BATTERY LIFE GETTING WORSE?
WHAT IS A SOLID STATE BATTERY?
BATTERY HEALTH & SAFETY IN YOUR 5G PHONE
DON’T GAMBLE AWAY THE SAFETY OF YOUR SMARTPHONE AND YOUR BRAND
REINVENTING THE WHEEL
SO YOU WANT TO START A NEW BATTERY COMPANY
COUNTERFEIT BATTERIES
IMAGINE YOUR LIFE WITHOUT A BATTERY !
ELECTRIFYING EVERYTHING IN THE 2020s
WHY DOES THE PORSCHE TAYCAN USE 800-V BATTERY PACKS?
BATTERY SAFETY & LONGEVITY: 4 RECOMMENDATIONS RIGHT NOW
WHAT WE LEARNED FROM 100M SMARTPHONES
ENERGY DENSITY: GETTING TO LONGER DRIVING RANGES
BATTERY MANAGEMENT IS DISRUPTING THE VALUE CHAIN IN ELECTRIC VEHICLES — PART 1
BATTERY MANAGEMENT IS DISRUPTING THE VALUE CHAIN IN ELECTRIC VEHICLES: THE CHANGING SUPPLY CHAIN — PART 2
BATTERY SAFETY IS THE ELEPHANT IN THE ROOM…MAKE IT A FRONT-AND-CENTER PRIORITY
THE SUN WILL RISE FROM THE WEST: PREDICTIONS FOR 2022
LIAR, LIAR, BATTERY SUPPLIER! REALLY?
THE ROLE OF BATTERY ANALYTICS – PART I
« Previous
Next »
July 8, 2015

INSIDE THE BATTERY OF A NISSAN LEAF 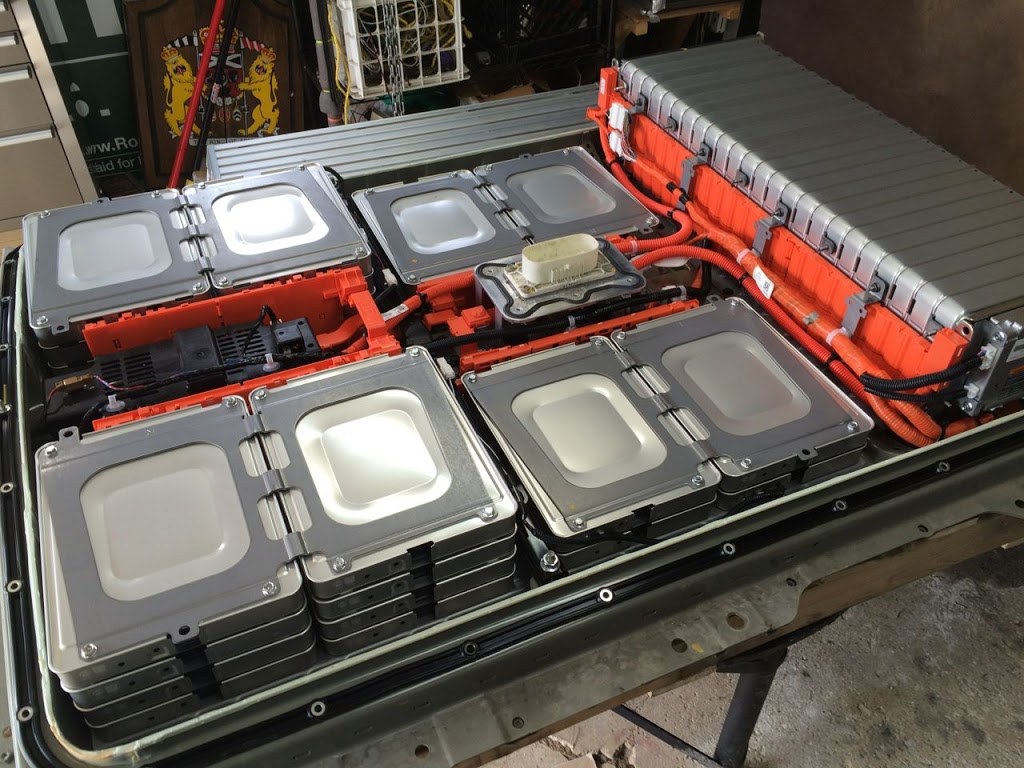 One of the most recognizable electric vehicles on the road, the Nissan Leaf, has a battery capacity of 24 kWh. It has a rated driving range of nearly 80 miles, about ⅓ that of the Tesla Model S. It is therefore not surprising that its battery capacity is also nearly ⅓ that of the Tesla’s battery which I covered earlier in this post. Today’s post, with the help of some publicly available information, sheds some light on what powers the Nissan Leaf.

The battery in the Nissan Leaf is manufactured and assembled by the Automotive Energy Supply Corporation (AESC), a joint venture corporation between Nissan and NEC located just outside of Yokohama, Japan. Until Tesla’s Gigafactory comes on line, AESC’s factory remains the largest automotive battery manufacturer shipping nearly 90,000 batteries annually, mostly into the Nissan and Renault EVs and hybrids.

AESC discloses on its website some pertinent details about the battery and its characteristics. A teardown of the Leaf battery pack by Ben Nelson at 300mpg.org supplements this post with a nice step-by-step mechanical disassembly of this pack. The weight of the Nissan Leaf pack checks in at 648-lb, about ½ that of the Tesla’s pack, yet only ⅓ its capacity. I will revisit this point below.

The first observation we make is that the pack consists of smaller modules. In fact, AESC tells us that there are 48 of them, each measuring about 303 x 223 x 55 mm (11.93 x 8.78 x 1.38 in) and weighing about 3.8 kg (8.4 lb). These modules are arranged into three distinct sections, one near the back with 24 modules bolted to each other in a vertical position, and two other sections on each side of the pack, each with 12 modules in a horizontal position. Electrically, the modules are all connected in series. Bus bars (thick copper connectors) electrically connect together these three distinct sections.

Each module is made of four individual pouch (also known as laminate) cells, each cell like the one shown in the next photograph. The four cells are electrically configured as 2 in series and 2 in parallel. This prior post teaches more about series and parallel configurations.

AESC shares some of the electrical characteristics of the cell. Each cell is rated at 32.5 Ah, or about 10X that of the 18650 cell used in the Tesla. It uses a different material for the cathode called lithium-manganese-oxide with nickel oxide (LiMn2O4 with LiNiO2) that is inherently safer than the lithium-cobalt-oxide cathode material used in mobile devices and the Tesla pack. The cell’s voltage chart shows a maximum cell voltage of 4.2V. Rated nominally at 3.75V, one pouch cell can store a maximum 122 Wh of energy, or about 10 times what an iPhone 6 Plus battery can store.

So let’s do some math. Each module contains 4 cells, so that’s a total energy of 488 Wh. This is now a substantial amount and hence one should exert plenty of caution in handling or using such modules. The nominal voltage across one module is 2×3.75 = 7.5V, and the nominal voltage across the entire Leaf pack is 48×7.5 = 360V. The maximum voltage at the pack is 2×4.2×48 = 403V, though it is widely known that the Leaf only uses about 80% of the pack’s capacity (20 kWh out of the 24 kWh to preserve cycle life) making the maximum cell voltage closer to 4.0V, and the pack’s maximum voltage closer to 384V.

The voltage chart above shows that one cell can deliver at least 90A of current. That’s equivalent to a pack delivering more than 180A at 384V, or 70+ kW (95+ hp) of power to the drivetrain. This estimate is not far off from the Leaf’s vehicle rating of 90 kW (120 hp). In any case, one can see that both current and voltage values are high, warranting special design measures to ensure safety.

But for the added safety of the LMnO material, Nissan incurs some important penalties. First, the intrinsic energy density of the individual pouch is only about 320 Wh/L. Compare this to nearly 700 Wh/L for the Panasonic cells used by Tesla. Why does it matter? Energy density translates directly to range, and range, or rather lack of it, is right now the #1 challenge for electric vehicles. This is precisely why the Tesla pack weighs only twice more than the Leaf pack, yet delivers 3x more driving range. In other words, a Nissan Leaf using a hypothetical battery with cells at 700 Wh/L should be able to deliver a range of 120 – 140 miles, instead of the present 80 miles. I want one of those!

Second, the use of large pouches makes it necessary to have dual levels of packaging, one at the module level, then again at the pack level. This adds unnecessary weight and volume to the pack. Look at the energy density for the module and the pack. For the module, it is down to 131 Wh/L, and for the pack, it is a dismal 49 Wh/L.

Another way to look at this mechanical inefficiency: The total weight of the 192 cells is 151 kg (332 lbs) — that’s the part that really stores energy — to which the steel boxes, plates, wire harnesses and electronics add another 144 kg (316 lbs) for a total pack weight of 295 kg (648 lbs). In other words, that’s 316 lbs of added weight that contributes zero to energy storage. Each pound of weight in the Leaf battery pack stores 37 Wh of energy. By comparison, each pound of weight in the Tesla S pack stores 64 Wh of energy!….this Leaf pack design does not scale well for longer driving ranges.

This, folks, says that a Leaf is a good Gen 1 vehicle, but that Nissan needs to figure out major improvements to its battery if it is to become widely adopted beyond select green and affluent communities like our San Francisco Bay Area.